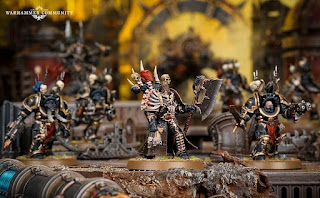 Image from GW, because the atmospheric pics are awesome

There's A LOT of chatter on why the Master of Executions(MoE) is not a good HQ.  Or that he'd see even less time if he was a different unit type, such as Elites.  Just go ahead, and dip your toe into any of the more popular sites/discussion boards and you'll see exactly that.

Yes... he is limited in wargear, you can't modify it at all, he has no invul save, AND he doesn't have an aura of any kind.  Unlike Lords, or the other Character hunter Exalted Champions.

For a lot people, he is an automatic no for their lists, and I can totally see why.  The above reasons are very valid considerations.  However, I think this model has the potential to wreck some face given the right combo of Warlord Traits and Relics.  There are two in particular that I have been kicking around with some list builds.  One jumped out at me as soon as I got Vigilus Ablaze, and the other sort of came about recently.

I know with his initial reveal on the Community site, lots of people thought he was going to be for World Eaters.  I was more curious if he was going to be available for everyone.  So when the new codex confirmed this for me I was very happy about that fact.  I was a little bummed that you couldn't modify his wargear, and I was not sure about the head scuplts for his model at all.  For some reason though, I couldn't write it off.  Something was making me comeback to looking at him as a valid choice.

Once I got Vigilus Ablaze in my hands I quickly figured out why.  Renegades, and specifically the Flawless Host.

Talk about making a blender bot. 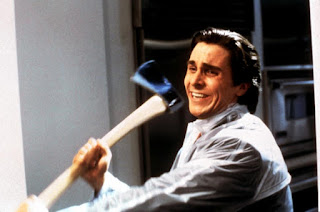 Take a MoE, make him Flawless Host, give him the Mark of Slaanesh... which you should anyway because he's Flawless Host...then make him the Warlord to give him Ultimate Confidence, and then the Intoxicating Elixir Relic.

As soon as you make him Flawless Host, he gets Death to the Imperfect(DttI) Legion Trait... get an extra attack on a 6+ on everyone.  This also STACKS with Death to the False Emperor(DttFE).  So normally he would generate +2 attacks on Imperium models.  The Flawless Host Warlord Trait "Ultimate Confidence" increases the extra attacks from DttI.  It goes to +1 attack, to +3 attacks.  So now you're generating +4 attacks on Imperium models.  Give him Intoxicating Elixir to bump up his base Strength to 5 and get an extra attack as well.

So what you get is a 6 attack model, with exploding 6s generating +3(non-Imperium) - +4(Imperium) additional attacks, hitting on 2s at Strength 10, wounding most infantry on 2s and 3s for everything else while also getting Mortal Wounds on those 6+ Wound Rolls as well, -3AP, and D3 Damage.  If you direct that much damage at a singular enemy character... the likely hood of it straight up dying are good.  I've been practice rolling a lot, stuck at home from some minor medical issues, using Custodes as a base target because they are tough, have multiple wounds, and have a good invul save.  The most damage I have caused so far is 28 damage with 4 Mortal Wounds.  That could kill a Knight.

That's an incredible amount of damage from one, 70 point, model.

That's what strikes me the most.  He's 70 points.  Roughly half of Kharn's cost but doing almost equivalent damage without having to use a strat to fight again.  You can use a strat(We Cannot Fail) to reroll all failed hit rolls in the fight phase if you really need something dead.

Now what happens when you take a Supreme Command Detachment of them in a Rhino?  the other 3-4 MoE won't hit as hard as the Warlord but all of them running around like that is scary and can't really be ignored.

And I know... everyone is absolutely RAVING about Red Corsairs out of Vigilus Ablaze.  They do have a sweet set up, but mostly for me it's that Advance/Charge that the other Renegades don't get.  A MoE could go really well with them, or in a Renegade Chapters army.

Alternatively you can tweak this build by just switching out the Ultimate Confidence warlord trait with Flames of Spite from the CSM codex.  You drop 2 extra attacks... so +1 attack on everyone, and +2 attacks on Imperium... BUT you're now generating +2 Mortal Wounds for evey 6+ Wound Roll.  Less attacks for potentially more Mortal Wounds.

For either of these builds, but especailly the first one, add Prescience(preferable) and/or some Dark Apostle Prayers(either +1 to wound or the 5++) for extra hilarity.  If you go for an extra Relic, might I suggest The Flawless Cloak for a nearby Apostle to bump his aura(s) to a 9" bubble?

Cheaper than a Black Legion Chainlord/Smash Captain by 23 points, but not as mobile, doesn't have a reroll aura, or an invul save... but could potentially dish out 18-30 attacks, and a 6" Heroic Intervention to an enemy Character should not be discounted either.

To me, this one model encapsulates 8ths ability to throw a lot of dice to force your opponent to start missing saves.  Just in the Fight Phase instead of the Shooting Phase.  So now I want my own little cadre of Executioners running around be a major nuisance.  I think it would be glorious.

Anyway, I couldn't wait for the official pre-order/release so I've converted my own up, and just have to figure out which head to use.  Chaos chariot Slaanesh head, or one of the Slaanesh heads from the now out of production Forsaken kit.  Maybe I'll pick up one actual MoE and convert up one more from Shadowspear like I did for this one.  He's since gotten a right arm holding a head, and is pretty much ready to be primed once the humidity drops a bit. 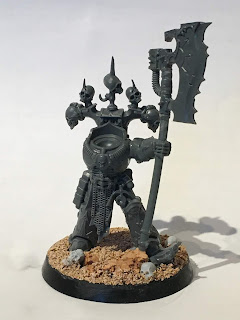 For all your hobby desires.

Denizens of the Warp